Researchers at Stanford University used data from the Union Army Veterans of the Civil War (1860-1940), the National Health and Nutrition Examination Survey (1971-1975), and the Stanford Translational Research Integrated Database Environment (2007-2017) to determine that the mean body temperature in men and women has decreased by 0.03 degrees Celsius per birth decade.  The reduction in body temperature is a proxy for metabolic rate and this may help to explain the changes in the health of humans and the increase in life expectancy. 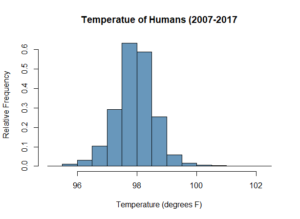 Here is a link to the original study.   Included in the study is a zip file with all the original data.  The file is extremely large (over 70 MB) for the combined data, so analysis in most stats packages will be a challenge.   However, R can handle it.  If you are using other packages, first import the data to Excel and attempt to cut and paste what you need.  The data sets for each individual cohort is a little more manageable.

Okay, so what can you do with this data?